Today is one of those days when you know how wonderful it is to live on water. Glancing out of the kitchen window, as I was preparing breakfast, I saw a water dragon on the far shore of the canal. We haven’t seen any around for a while, so sighting this one created a wee bubble of happiness for me.

Then it was gone.

I looked again. A small wake appeared on the surface of the water. The dragon was swimming across! It arrived and sat at the edge of the beach for twenty minutes or so before deeming it safe to emerge.

t know what startled it and caused it to high tail it back to the canal. Perhaps it was the swoop of the gulls, but scurry it did. I had only a moment to capture a shot as it made its escape (check inside the orange circle.) The debris on the beach is part of a palm frond about a metre long. There are lots of those in the canal right now, thanks to the wind we’ve had over the past few days. The dragon, side-on, was about the same size.

Of course, its appearance triggered a bit of research. That’s what writers do :)

I found that the Eastern Water Dragon has been around for 20 million years, will stay under water for over an hour if threatened, and can be an Indigenous totem. There is a great picture and some useful information on the Backyard Buddies site. 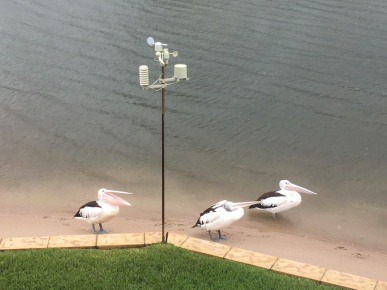 It seems to be a week for visits from the wild.

On Monday morning, there was a pied currawong sitting on the railing outside my study; Tuesday brought this trio of pelicans; Wednesday a series of stingrays swimming by; and today, the water dragon.

Perhaps the Universe is sending me a message? For now, I’ll enjoy the visits as they come and look forward to what tomorrow may bring. 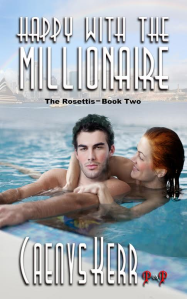